Networx3 has expanded its team of skilled engineers with new hire Andrew Fyfe.

The 36-year-old father-of-three from Manchester joined the firm to take on a newly created dual role of surveyor and senior engineer. 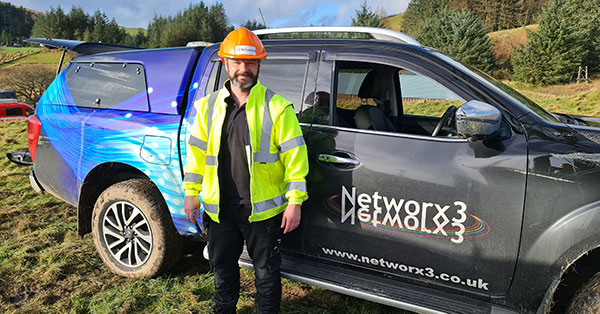 Andrew joined Networx3 in October having spent several years working as a telecommunications surveyor on the railway.

Scott Gray, an old colleague of Andrew’s, came to work for Networx3 earlier this year and suggested Andrew join the firm too.

Andrew said: “Scott had brilliant feedback about Networx3 – a tight family-fun business – where everyone helped each other out but there was also progression in the future.

“I’m always up for new challenges and I’m gaining new knowledge all the time. I’m really enjoying the new role at Networx3.”

So far Andrew has been getting stuck in with blown fibre optic cabling work across England and Wales including high-security client work in government buildings, critical infrastructure and the green energy sector.

Networx3 commercial director Caroline Earnshaw said: “We are so busy at the moment we needed to hire someone who could hit the ground running and offer flexible surveying and engineering skills to clients.

“We have such a diverse client range – from the MOD and prestigious sporting venues to mobile phone companies and wind farms – that some of the jobs we go on are quite specialist. Having Andrew in a dual role allows us to be responsive to the different client work we get asked to do.

“What’s great about Andrew is that he’s still willing to learn. He’s really experienced and good at what he does but he wants to evolve with Networx3 and expand his skills.

“Andrew’s fitted straight in and we’re really happy he’s joined Networx3. The fact that Networx3 was recommended to him by a current employee shows that we’re a great place to work.”