From Malawi to Lancashire - a Networx3 story

Networx3 is no stranger to hiring the brightest and the best from the ex-forces community. 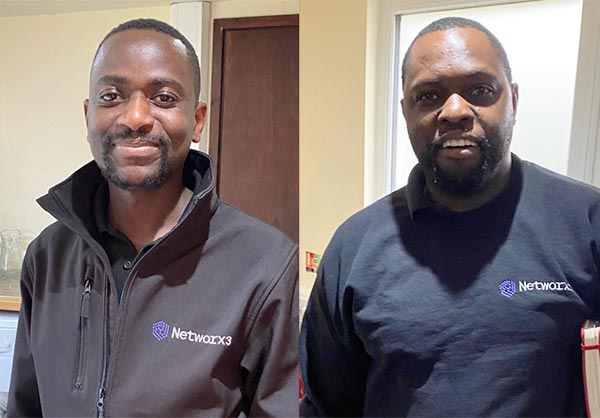 But their globetrotting engineering duo Keith Namisikha and Richard Mbawa may well hold the record for the most well-travelled of the former servicemen on its payroll.

The pair both hail from Malawi but ended up in the UK and joined the armed services.

Between them they clocked up 24 years of services before leaving for civvy street and joining Networx3.

Keith spent seven years serving in the Royal Irish Regiment as an infantry soldier before leaving in 2016 to train to be a telecommunications engineer.

The 34-year-old dad-of-one spent three years working for a large telecommunications firm before bumping into a Networx3 engineer while subcontracting who recommended the company as a great place to work.

Keith messaged commercial director Caroline Earnshaw on LinkedIn and landed an interview which led to a new job.

Keith said: “I like my job - I’ve got job security and I work with good colleagues including a few ex-squaddies. Networx3 stands out as one of the good companies to work for in our industry.”

Dad-of-two Richard was inspired to have a life in uniform by his two grandfathers who were senior officers in the Malawian Police and Richard joined the Royal Logistic Corp in 2002.

The 39-year-old served in Germany, Iraq, Afghanistan, Cyprus, Poland, Kenya, Spain, Canada and Estonia and in 2014 when he became a first-time Dad he and his wife Vanessa decided that they wanted a more stable family life for their daughter Melissa.

Using an Army grant and some of his own money Richard embarked on an Open University law degree while working full time and spent six years juggling studying, parenting and life as a Private.

He graduated in 2018 and relocated to Hartlepool in 2019 following an honourable discharge from the Army.

He completed a fibre optics course and spent six weeks as a self employed telecommunications engineer before ending up working alongside a Networx3 team on a security-sensitive job.

When Richard learned that Networx3 were a good company to work for and were hiring he approached commercial director Caroline Earnshaw and joined the Networx3 team in 2020.

Richard said: “It’s a breath of fresh air working for Networx3. For 17 years the Army was my life; all that I knew was a life in the Forces.

“When I started work for Networx3 and I was told ‘there’s your van, your tools, fuel card and your phone’ it felt great to have that sense of freedom and independence. I was trusted to go and do a job without being micro managed.

“What I do is the difference between someone being able to do their job that day or not. I love the instant results of doing a job because it’s a pass or fail.”